First my Thalia stooped in sportive mood
To Syracusan strains, nor blushed within
The woods to house her. When I sought to tell
Of battles and of kings, the Cynthian god
Plucked at mine ear and warned me: “Tityrus,
Beseems a shepherd-wight to feed fat sheep,
But sing a slender song.” Now, Varus, I-
For lack there will not who would laud thy deeds,
And treat of dolorous wars- will rather tune
To the slim oaten reed my silvan lay.
I sing but as vouchsafed me; yet even this
If, if but one with ravished eyes should read,
Of thee, O Varus, shall our tamarisks
And all the woodland ring; nor can there be
A page more dear to Phoebus, than the page
Where, foremost writ, the name of Varus stands.
Speed ye, Pierian Maids! Within a cave
Young Chromis and Mnasyllos chanced to see
Silenus sleeping, flushed, as was his wont,
With wine of yesterday. Not far aloof,
Slipped from his head, the garlands lay, and there
By its worn handle hung a ponderous cup.
Approaching- for the old man many a time
Had balked them both of a long hoped-for song-
Garlands to fetters turned, they bind him fast.
Then Aegle, fairest of the Naiad-band,
Aegle came up to the half-frightened boys,
Came, and, as now with open eyes he lay,
With juice of blood-red mulberries smeared him o’er,
Both brow and temples. Laughing at their guile,
And crying, “Why tie the fetters? loose me, boys;
Enough for you to think you had the power;
Now list the songs you wish for- songs for you,
Another meed for her” -forthwith began.
Then might you see the wild things of the wood,
With Fauns in sportive frolic beat the time,
And stubborn oaks their branchy summits bow.
Not Phoebus doth the rude Parnassian crag
So ravish, nor Orpheus so entrance the heights
Of Rhodope or Ismarus: for he sang
How through the mighty void the seeds were driven
Of earth, air, ocean, and of liquid fire,
How all that is from these beginnings grew,
And the young world itself took solid shape,
Then ‘gan its crust to harden, and in the deep
Shut Nereus off, and mould the forms of things
Little by little; and how the earth amazed
Beheld the new sun shining, and the showers
Fall, as the clouds soared higher, what time the woods
‘Gan first to rise, and living things to roam
Scattered among the hills that knew them not.
Then sang he of the stones by Pyrrha cast,
Of Saturn’s reign, and of Prometheus’ theft,
And the Caucasian birds, and told withal
Nigh to what fountain by his comrades left
The mariners cried on Hylas till the shore
“Then Re-echoed “Hylas, Hylas! soothed
Pasiphae with the love of her white bull-
Happy if cattle-kind had never been!-
O ill-starred maid, what frenzy caught thy soul
The daughters too of Proetus filled the fields
With their feigned lowings, yet no one of them
Of such unhallowed union e’er was fain
As with a beast to mate, though many a time
On her smooth forehead she had sought for horns,
And for her neck had feared the galling plough.
O ill-starred maid! thou roamest now the hills,
While on soft hyacinths he, his snowy side
Reposing, under some dark ilex now
Chews the pale herbage, or some heifer tracks
Amid the crowding herd. Now close, ye Nymphs,
Ye Nymphs of Dicte, close the forest-glades,
If haply there may chance upon mine eyes
The white bull’s wandering foot-prints: him belike
Following the herd, or by green pasture lured,
Some kine may guide to the Gortynian stalls.
Then sings he of the maid so wonder-struck
With the apples of the Hesperids, and then
With moss-bound, bitter bark rings round the forms
Of Phaethon’s fair sisters, from the ground
Up-towering into poplars. Next he sings
Of Gallus wandering by Permessus’ stream,
And by a sister of the Muses led
To the Aonian mountains, and how all
The choir of Phoebus rose to greet him; how
The shepherd Linus, singer of songs divine,
Brow-bound with flowers and bitter parsley, spake:
“These reeds the Muses give thee, take them thou,
Erst to the aged bard of Ascra given,
Wherewith in singing he was wont to draw
Time-rooted ash-trees from the mountain heights.
With these the birth of the Grynean grove
Be voiced by thee, that of no grove beside
Apollo more may boast him.” Wherefore speak
Of Scylla, child of Nisus, who, ’tis said,
Her fair white loins with barking monsters girt
Vexed the Dulichian ships, and, in the deep
Swift-eddying whirlpool, with her sea-dogs tore
The trembling mariners? or how he told
Of the changed limbs of Tereus- what a feast,
What gifts, to him by Philomel were given;
How swift she sought the desert, with what wings
Hovered in anguish o’er her ancient home?
All that, of old, Eurotas, happy stream,
Heard, as Apollo mused upon the lyre,
And bade his laurels learn, Silenus sang;
Till from Olympus, loth at his approach,
Vesper, advancing, bade the shepherds tell
Their tale of sheep, and pen them in the fold. 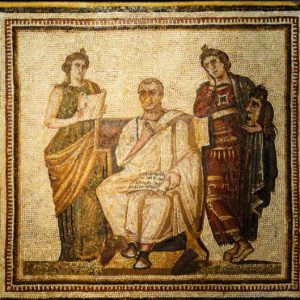