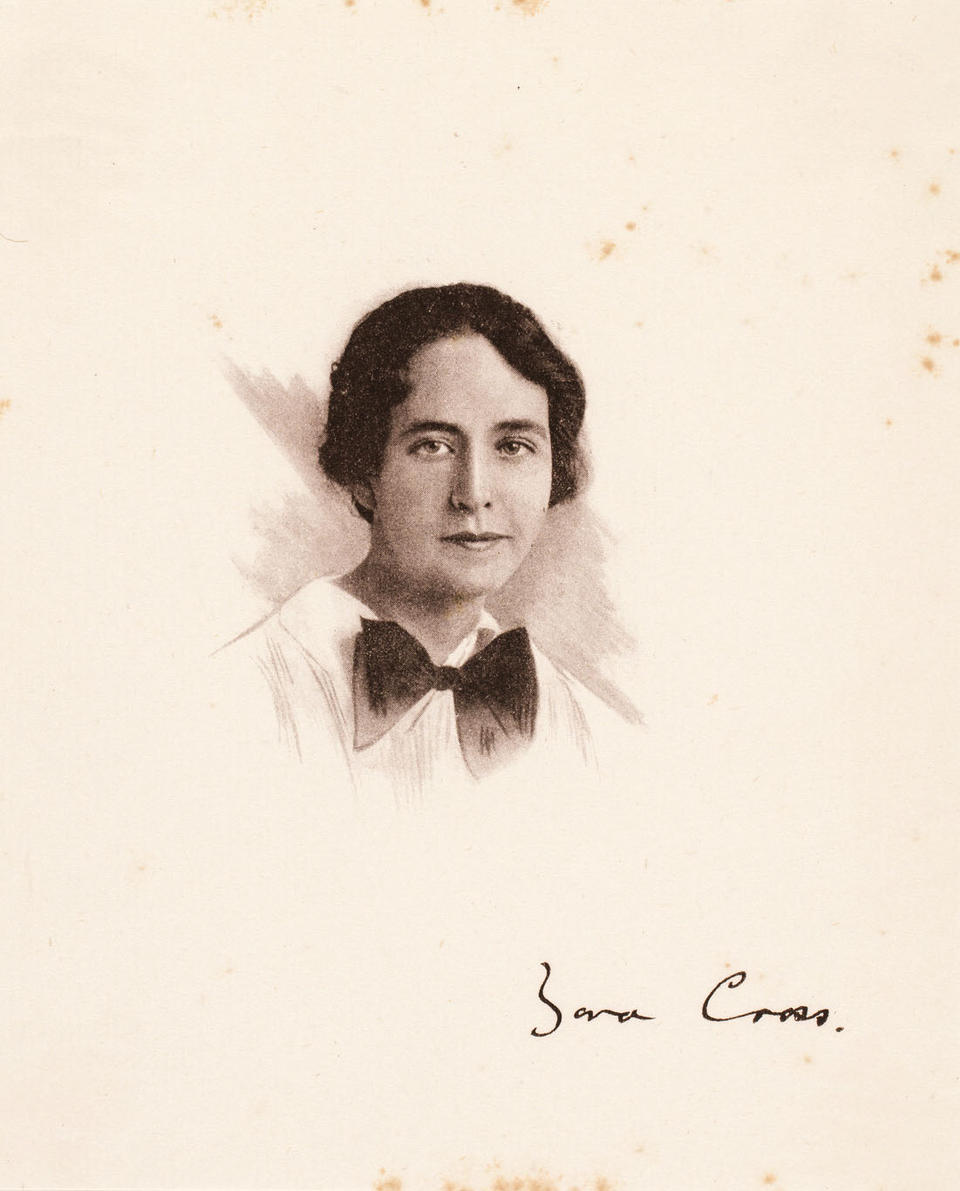 Biography of Zora May Bernice Cross

Poems by Zora Bernice May Cross

Zora Cross or Zora Bernice May Cross was in her own time an adventurous and courageous poet — or poetess, — journalist and a fiction author who is now almost forgotten in her own land. She dared to write about subjects, such as feminine love and motherhood, which were considered too risqué in her own day.

If I’d be permitted to pass my own judgments, I’d say that Zora Cross is a wonderful, sensual and alas much underappreciated poet.

And now on to biography:

Article on Zora Cross from the Australian Dictionary of Biography

This article was published:

Zora Bernice May Cross (1890-1964), writer, was born on 18 May 1890 at Eagle Farm, Brisbane, daughter of Ernest William Cross, a Sydney-born accountant, and his wife Mary Louisa Eliza Ann, née Skyring, whose parents were early settlers at Moreton Bay. Zora inherited literary aspirations from both parents: a strong sense of poetic mission from her mother, and a strain of Celtic fantasy from her father, the son of an Irish printer. She was educated at Gympie and Ipswich Girls’ Grammar School, and from 1905 in Sydney at Burwood Superior Public School and Sydney Girls’ High School. In 1909-10 she attended the Teachers’ College, Sydney. She started primary teaching but left the service to give birth to a daughter who died. On 11 March 1911 she married Stuart Smith, an actor, but refused to live with him and the marriage was dissolved on 10 September 1922. The child of a further mysterious love affair Norman Garvin (b.1914) was adopted later by Zora’s de facto husband David McKee Wright, editor of the ‘Red Page’ of the Bulletin; they had two daughters.

With immense courage and enterprise, Zora Cross supported herself by acting in one of Philip Lytton’s companies and teaching elocution, then by freelance journalism. She wrote drama criticism for the magazines Green Room and the Lone Hand, was a columnist for the Brisbane Daily Mail, sent poems to literary magazines, and after the outbreak of World War I, toured North Queensland with a concert party in aid of war funds.

In 1916 Zora Cross submitted her first novel, apparently on an Aboriginal theme, to T. C. Lothian, who refused it. Her first book of poems, A Song of Mother Love (1916), was published in Brisbane in answer to the German ‘Song of Hate’. She was also corresponding about a long poem with Wright, who tried to impose some discipline on her life and her writing.

Zora returned to Sydney in 1917 and at the end of the year published Songs of Love and Life, some of which had already appeared in the Bulletin. The sixty love-sonnets in the book were the first sustained expression in Australian poetry of erotic experience from a woman’s point of view, a fusion of sensuousness and religiosity, rather than sensuality; they attracted favourable if somewhat startled reviews. These sonnets, and similar poems in The Lilt of Life (1918) were a frank, passionate, if somewhat monotonous, expression of her love for Wright, with whom she later went through a form of private marriage in an empty church.

As the inspiration of the poems became known, the affair scandalized literary and journalistic circles in Sydney, mainly because it was mistakenly believed that Wright had abandoned his responsibility for his four sons by Margaret Fane, who had left him for the journalist Hilary Lofting; in fact he and Zora contributed generously to the support of the Lofting ménage. Nevertheless, Wright seems to have been gradually eased out of his editorship of the ‘Red Page’; the strain on their combined resources was severe.

Wright’s sudden death in 1928 left Zora in great financial difficulties. Her struggle to support her three children, mainly by freelance journalism, makes a painful story, though she remained cheerful, free of self-pity and simply got on with her work. Her younger daughter remembers her as ‘a delightful and amusing parent, who never for one moment lost sight of her priority as a writer and a poetess’. In spite of a Commonwealth Literary Fund pension of £2 a fortnight from 1930, the family were often short of the bare necessities.

After Wright’s death, Zora concentrated on a Roman theme which had surfaced from a previously unpublished novel, ‘A story from Australia, or the complete education of Daisy Marsh’, intending to write a trilogy of Roman novels. A legacy from her mother in 1953 enabled her to visit Rome for research, but the books were never completed. Faithful to her dream of love and poetry, she continued to work until she died of arteriosclerotic heart disease on 22 January 1964, at the cottage in which she had lived with Wright at Glenbrook, in the Blue Mountains: she was buried with Anglican rites in Emu Plains cemetery. She was survived by her son and her younger daughter April; her elder daughter Davidina died in 1941.

Zora Cross had a true lyric gift, revealed best perhaps in some of her children’s verse: for example, the charming The City of Riddle-mee-ree (1918), and in more sombre tones in the fine Elegy on an Australian Schoolboy (1921), in memory of her 19-year-old soldier brother, John Skyring Cross. The landscape of her verse is rarely Australian in character, but she could suddenly abandon romantic convention for lines of surprising dramatic strength. Her serialized novels have little artistic importance: those in book form, notably Daughters of the Seven Mile (1924) show a then unusual interest in Queensland settings and some awareness of developing social and economic stresses in Australia. Her pamphlet An Introduction to the Study of Australian literature (1922) has outlived its original usefulness, but her unpublished impressions of writers she knew still have value. So have the accounts left by members of her family of their relationships with tribal Aboriginals, of which she made some use in her novels.

This article was published in hardcopy in Australian Dictionary of Biography, Volume 8, (Melbourne University Press), 1981

View the front pages for Volume 8

Zora Bernice May Cross was an Australian poet, novelist and journalist.

She was born in Brisbane, and was educated at Ipswich Girls’ Grammar School and then Sydney Teachers’ College. She taught for three years and then worked as a journalist, for the Boomerang and then as a freelance writer.

After the failure of her first marriage she eventually lived in a de facto marriage with David McKee Wright. Zora’a first book of poetry, A Song of Mother Love, was published in 1916. Songs of Love and life, a collection of love poetry thought at the time to be rather too frank, but which proved popular enough to appear is several editions, followed in 1917.

The 1920s saw the continuation of war poetry, both celebrating the exploits of the fighting men and lamenting the realities of war. Zora Cross’s Elegy on an Australian schoolboy, a poem about her young brother who was killed in the war, is an example of the latter. She is best-known for her 1917 book, Songs of love.

She was known not only for her poems, including sonnet sequences, but for a private life scandalous by the standards of her time. She wrote about sex, childbirth and war, in terms also considered too explicit by contemporaries.

As Bernice May, she wrote a regular column in the 1930s for the Australian Women’s Mirror. It comprised interviews with women writers.

Zora Cross died in the Blue Mountain region of New South Wales in 1964.

Back to the Zora Cross Page