Florence, rejoice! For thou o’er land and sea

So spread’st thy pinions that the fame of thee

Hath reached no less into the depths of Hell.

So noble were the five I found to dwell

Therein — thy sons — whence shame accrues to me

And no great praise is thine; but if it be

That truth unveil in dreamings before dawn,

Then is the vengeful hour not far withdrawn

When Prato shall exult within her walls

To see thy suffering. Whate’er befalls,

Let it come soon, since come it must, for later,

Each year would see my grief for thee the greater.

We left; and once more up the craggy side

By the blind steps of our descent, my guide,

Remounting, drew me on. So we pursued

The rugged path through that steep solitude,

Where rocks and splintered fragments strewed the land

So thick, that foot availed not without hand.

Grief filled me then, and still great sorrow stirs

My heart as oft as memory recurs

To what I saw; that more and more I rein

My natural powers, and curb them lest they strain

Where Virtue guide not, — that if some good star,

Or better thing, have made them what they are,

That good I may not grudge, nor turn to ill.

As when, reclining on some verdant hill —

What season the hot sun least veils his power

That lightens all, and in that gloaming hour

The fly resigns to the shrill gnat — even then,

As rustic, looking down, sees, o’er the glen,

Vineyard, or tilth where lies his husbandry,

Fireflies innumerable sparkle: so to me,

With flames no fewer seemed to scintillate

The shades of the eighth pit. And as to him

Whose wrongs the bears avenged, dim and more dim

Elijah’s chariot seemed, when to the skies

Uprose the heavenly steeds; and still his eyes

Strained, following them, till naught remained in view

But flame, like a thin cloud against the blue:

So here, the melancholy gulf within,

Wandered these flames, concealing each its sin,

Yet each, a fiery integument,

Wrapped round a sinner.

On the bridge intent,

Gazing I stood, and grasped its flinty side,

Or else, unpushed, had fallen. And my guide,

Where swathed each in his unconsuming fold,

The spirits lie confined.” Whom answering,

To that which I already had supposed;

And I was fain to ask who lies enclosed

In the embrace of that dividing fire,

Which seems to curl above the fabled pyre,

Where with his twin-born brother, fiercely hated,

Eteocles was laid.” He answered, “Mated

In punishment as once in wrath they were,

Ulysses there and Diomed incur

The eternal pains; there groaning they deplore

The ambush of the horse, which made the door

For Rome’s imperial seed to issue: there

In anguish too they wail the fatal snare

Reft of Achilles; likewise they receive

Due penalty for the Palladium.”

“Master,” I said, “if in that martyrdom

The power of human speech may still be theirs,

I pray — and think it worth a thousand prayers —

That, till this horned flame be come more nigh,

We may abide here; for thou seest that I

With great desire incline to it.” And he:

I grant; but thou refrain from speaking; leave

That task to me; for fully I conceive

What thing thou wouldst, and it might fall perchance

That these, being Greeks, would scorn thine utterance.”

So when the flame had come where time and place

Seemed not unfitting to my guide with grace

To question, thus he spoke at my desire:

“O ye that are two souls within one fire,

If in your eyes some merit I have won —

Merit, or more or less — for tribute done

When in the world I framed my lofty verse:

Move not; but fain were we that one rehearse

By what strange fortunes to his death he came.”

The elder crescent of the antique flame

Began to wave, as in the upper air

A flame is tempest-tortured, here and there

Tossing its angry height, and in its sound

As human speech it suddenly had found,

Rolled forth a voice of thunder, saying: “When,

The twelvemonth past in Circe’s halls, again

Aeneas, and had given it that name)

Not love of son, nor filial reverence,

The weary vigil of Penelope,

Could so far quench the hot desire in me

To prove more wonders of the teeming earth, —

Of human frailty and of manly worth.

In one small bark, and with the faithful band

That all awards had shared of Fortune’s hand,

I launched once more upon the open main.

Both shores I visited as far as Spain, —

Sardinia, and Morocco, and what more

The midland sea upon its bosom wore.

The hour of our lives was growing late

When we arrived before that narrow strait

Where Hercules had set his bounds to show

That there Man’s foot shall pause, and further none shall go.

Borne with the gale past Seville on the right,

And on the left now swept by Ceuta’s site,

`Brothers,’ I cried, `that into the far West

Through perils numberless are now addressed,

In this brief respite that our mortal sense

Yet hath, shrink not from new experience;

But sailing still against the setting sun,

Seek we new worlds where Man has never won

Before us. Ponder your proud destinies:

Born were ye not like brutes for swinish ease,

But virtue and high knowledge to pursue.’

My comrades with such zeal did I imbue

By these brief words, that scarcely could I then

Have turned them from their purpose; so again

We set out poop against the morning sky,

And made our oars as wings wherewith to fly

Into the Unknown. And ever from the right

Our course deflecting, in the balmy night

All southern stars we saw, and ours so low,

So five revolving periods the soft,

Pale light had robbed of Cynthia, and as oft

Replenished since our start, when far and dim

Over the misty ocean’s utmost rim,

Rose a great mountain, that for very height

Passed any I had seen. Boundless delight

Filled us — alas, and quickly turned to dole:

For, springing from our scarce-discovered goal,

A whirlwind struck the ship; in circles three

It whirled us helpless in the eddying sea;

High on the fourth the fragile stern uprose,

The bow drove down, and, as Another chose,

Over our heads we heard the surging billows close.”


Error: Your Requested widget " randompostforwidget-3" is not in the widget list. 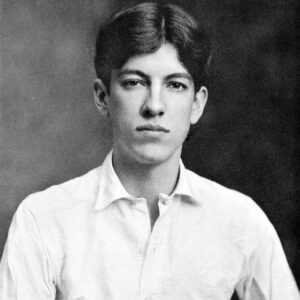 Alan Seeger
Alan Seeger (1888-1916) was an American war poet who fought and died in World War I during the Battle of the Somme, serving in the French Foreign Legion. Seeger was the brother of Charles Seeger, a noted American pacifist and musicologist and the uncle of folk musician, Pete Seeger.