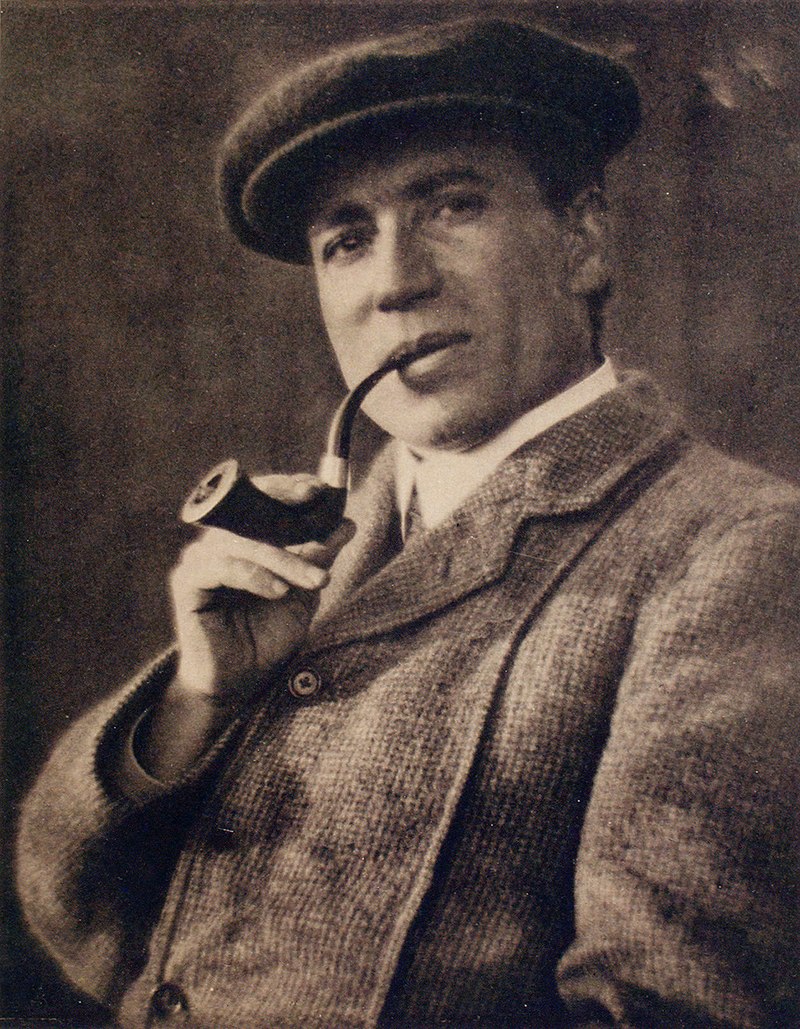 A Biography of William Henry Davies

Davies, William Henry (1871–1940), poet and writer, was born at his paternal grandfather’s public house, Church House inn, Portland Street, Newport, Monmouthshire, on 3 July 1871, the younger son of Francis Boase Davies (1843–1874), an iron-moulder, and his wife, Mary Ann Evans (b. 1839/40). William Davies’s father died when his son was three, and on his mother’s swift remarriage he, his sister, and his mentally disabled brother were adopted by their grandparents. His grandfather, a native of Cornwall, had been master of a small schooner. Davies attended the Temple Street School and Alexandra Road School in Newport; he was an unruly schoolboy, but had a passion for reading. Later on, in Who’s Who, he chose to describe himself as having ‘picked up knowledge among tramps in America, on cattle boats, and in the common lodging-houses in England‘.

On leaving school Davies was apprenticed to a picture-frame maker, but having been left an allowance of 10s. a week by his grandmother, at the age of twenty-two he obtained from his trustee an advance of £15 for passage-money to the USA, reaching New York with only a few dollars. He then began that career which he later described in his Autobiography of a Super-Tramp (1908; many subsequent impressions): tramping thousands of miles in the United States in five or six years, most often begging, but sometimes working at fruit-picking; riding illicitly on freight trains; and making eight or nine trips to England as a cattle-man. He then returned home for a few months, in which time he spent half of his allowance, none of which he had touched since he had been in America, and which had accumulated to £120. He then decided to go to the gold-diggings in the Klondike; at Renfrew, Ontario, while attempting to board a moving train, he fell, and the wheel severed his right foot at the ankle. It was found necessary to amputate the leg at the knee, but he was well nursed and was able to return to Wales within five weeks. He soon moved to London, where he lived in common lodging houses on his allowance, less 2s., which he sent back every week to Newport. After more than two years in London, which continued to be his base, he made several walking tours as a pedlar of laces, pins, and needles, sometimes varying this life by preaching on street corners.

By 1905 Davies’s poems had been rejected by several publishers, until he approached C. A. Watts & Co., with a letter of recommendation from George R. Sims. Recognizing the merit of the poems, they agreed to pay for the printing of The Soul’s Destroyer, and other Poems, partly on the assurance that Davies would do his utmost to dispose of copies among likely purchasers. He sent them to various people, requesting each of them either to send him a half-crown or to return the book. Among the recipients was (George) Bernard Shaw, who became actively interested. At his suggestion Davies sent copies to Philip Edward Thomas, Israel Zangwill, Edward Garnett, St John Adcock, editor of The Bookman, and others. Favourable reviews appeared; Davies mentions with especial gratitude notices by Arthur Symons and Arnold Bennett. Edward Thomas, he says, ‘gave me a fine boom in several influential papers … and became a practical friend, finding me a small cottage in the Weald of Kent [at Sevenoaks] … my rent, coal and light being paid mysteriously by Thomas and his friends‘. In Who’s Who Davies stated briefly: ‘became a poet at the age of thirty-four; been one ever since‘. Between 1905 and 1939 he produced a score of slim volumes of verse: the Collected Poems of 1943, with an introduction by Osbert Sitwell, contains 636 pieces. Following on the early reviews, one newspaper wrote up Davies’s story.

At Sevenoaks Davies wrote his Autobiography, which was published with a preface by Shaw at the suggestion of Garnett and Thomas. Shaw’s wife, Charlotte, paid for the typesetting and the casting of the plates, of which she made a present to Davies. It was no doubt the preface that made Davies known to a large public, but Shaw states that it was for the sake of the poems that he wrote the preface to the Autobiography. He had recognized at once that Davies was a poet: it was with some amusement that he wrote of the placid style of the prose book, in which tramps ‘argue with the decorum of Socrates, and narrate in the style of Tacitus‘, and in which Davies’s loss of a leg is mentioned with the utmost casualness. Davies also wrote four novels, two of which, The True Traveller (1912) and The Adventures of Johnny Walker, Tramp (1926), are semi-autobiographical, bridging the gap between the Autobiography and Later Days (1925). In 1924 he wrote an introduction to Defoe’s Moll Flanders, which is generically related to his other novels. In 1923 he published True Travellers: a Tramp’s Opera in Three Acts, in prose with interspersed lyrics. This was to be produced at the Lyric Theatre, Hammersmith, where The Beggar’s Opera had been successfully revived, but the scheme fell through. Davies’s other prose works are Beggars (1909), Nature (1914), and My Birds and my Garden (1933). He selected and edited two anthologies, Shorter Lyrics of the Twentieth Century, 1900 to 1922 (1922) and Jewels of Song (1930, reissued 1938). He was joint editor, with Austin Osman Spare, of a monthly magazine called Form (October 1921 to January 1922), to which he contributed the editorials, each with incidental poems.

In 1919 Davies was granted a civil-list pension, which was twice increased. In 1926 the University of Wales conferred on him the honorary degree of LittD. On 5 February 1923 he married Helen Matilda (d. 1979), daughter of William Payne, farmer, who came from Sussex: his happiness with her is recorded and reflected in The Lover’s Song-Book (thirty poems, 1933), reprinted as Love Poems (1935), with the number of poems increased to fifty. The story of his search, at the age of over fifty, among the poorer areas of London, for a suitable wife, and of his first meeting with Helen Payne, aged twenty-three and pregnant, at a bus stop, is told with engaging frankness in Young Emma, published in 1980, after his wife’s death. This account was read with much admiration by Shaw in 1924; he wished to retain the manuscript a while longer for his wife to read, but he advised Davies’s publisher, Cape, that to publish at that time would be damaging to the author’s reputation. Young Emma is also of particular interest to social historians of London after the First World War.

Davies died, childless, at Nailsworth, Gloucestershire, on 26 September 1940. Since the publication of The Essential W. H. Davies (1951), and The Complete Poems of W. H. Davies (1963), his poetry has become the subject of several re-evaluations. Following D. H. Lawrence’s early remark that Davies is ‘like a linnet that’s got just a wee little sweet song‘ (DLitB, 19, 1983, 108), Davies’s poetry has been compared with that of the Elizabethans, with Blake’s Songs of Innocence, with the poetry of Robert Burns, and with Wordsworth’s work. The publication in 1985 of W. H. Davies: Selected Poems led to a further resurgence of interest, when a reviewer in the Times Literary Supplement (25 January 1985, 79) described Davies as an ‘undercover poet‘ with an ‘instinct for conjuring disquietingness from the seemingly banal‘.