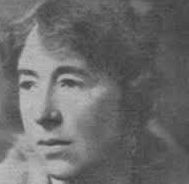 Though Winifred Mary Letts is a talented poetess, the latter has become almost a swear word in English-speaking countries, I understand that’s the case more acute in England than in America, and though her songs were put to music by Sir Charles Villiers Stanford, still a well-known composer, she is almost forgotten and is barely known outside a small circle of poetry academics.  Undeservedly so, because Winifred Mary Letts is a wonderful poet.

A symptom of being shoved into literary oblivion is the lack of photographs. I could not find very few low-quality photos of Winifred Mary Letts

I borrowed some elements of this biography from open sources.

Winifred Mary Letts was an English poet, novelist, and playwright who lived much of her life in Ireland. So, in a way, she was also an Irish poet. In 1913 and 1914 some of her poetry was set to music by the Irish composer Sir Charles Villiers Stanford who took six poems and called them A Sheaf of Songs from Leinster. The best known of these is one called A Soft Day.

Winifred Mary Letts was born in Salford, England. Salford was a town now incorporated into Greater Manchester. Her father was an English clergyman and the family vacationed in Dublin, where her mother was born. Mother and daughter moved to Ireland after the death of the Reverend Letts. They set up their home at Blackrock, County Dublin. Having begun her education in the southeast of England, Winifred now went to the Alexandra College in Dublin.

Winifred’s first literary successes came in the early 1900s when she wrote two short 1-act plays. These plays were performed at the Abbey Theatre in Dublin –  the first one in 1906; the other three years later. She then began writing books for both children and adults.

She was a nurse during the First World War, stationed at least for part of the time near her place of birth in Manchester. Winifred still found the time to write, and a collection of poems came out in 1916. This collection was an extremely popular book and her publishers relaunched it the following year, but this time used the title of one of the best poems as the overall title for the collection.

Also included in this book was another harrowing tale called The Deserter which describes the terror and hopelessness of the soldier who turns and runs, instead of standing to fight (which in the WWI on the Western Front really meant to be butchered), and who then pays the ultimate price for what he’s done

By the standards and expectations of time, she married extraordinary late in life, at the age of 44.  Her husband died, in 1943, and she later moved to Ireland, where she died,  in 1972, at the ripe old age of 90.