And so one day, as ever of old,
Hands out, they hurried, knee to knee;
On fire to cling and kiss and hold
And, in the other’s eyes, to see
Each his own tiny face,
And in that long embrace
Feel lip and breast grow warm
To breast and lip and arm.

So knee to knee they sped again,
And laugh to laugh they ran, I’m told,
Across the streets of Hell . . .
And then
They suddenly felt the wind blow cold,
And knew, so closely pressed,
Chill air on lip and breast,
And, with a sick surprise,
The emptiness of eyes. 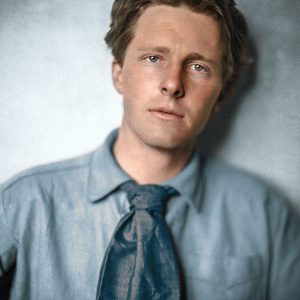 Rupert Brooke
Rupert Brooke was a poet, academic, campaigner, and aesthete who died serving in World War One, but not before his verse and literary friends established him as one of the leading poet-soldiers in British history. His poems are staples of military services, but the work has been accused of glorifying war.

When Day Is Done by Rabindranath Tagore
if birds sing no more, if the wind has flagged tired, then draw the veil of darkness thick upon me, even as thou ...

In The Metropolitan Museum by Sara Teasdale
Inside the tiny Pantheon We stood together silently, Leaving the restless crowds awhile, As ships find shelter ...

Love and Wine by William Wycherley
In vain I Drunkenness forswore, Because by That made Sick and Blind; Since tho' I have the Flask ...