THOUGH you be absent here, I needs must say

The Trees as beauteous are, and flowers as gay,

As ever they were wont to be ;

Nay the Birds rural musick too

Is as melodious and free,

As if they sung to pleasure you:

I saw a Rose-Bud ope this morn ; I’ll swear

How could it be so fair, and you away ?

How could the Trees be beauteous, Flowers so gay ?

Could they remember but last year,

How you did Them, They you delight,

The sprouting leaves which saw you here,

And call’d their Fellows to the sight,

Would, looking round for the same sight in vain,

Creep back into their silent Barks again.

Where e’er you walk’d trees were as reverend made,

As when of old Gods dwelt in every shade.

Is ‘t possible they should not know,

What loss of honor they sustain,

That thus they smile and flourish now,

And still their former pride retain ?

Dull Creatures! ’tis not without Cause that she,

Who fled the God of wit, was made a Tree.

In ancient times sure they much wiser were,

When they rejoyc’d the Thracian verse to hear ;

In vain did Nature bid them stay,

When Orpheus had his song begun,

They call’d their wondring roots away,

And bad them silent to him run.

How would those learned trees have followed you ?

You would have drawn Them, and their Poet too.

But who can blame them now ? for, since you’re gone,

They’re here the only Fair, and Shine alone.

You did their Natural Rights invade ;

Where ever you did walk or sit,

The thickest Boughs could make no shade,

Although the Sun had granted it :

The fairest Flowers could please no more, neer you,

Then Painted Flowers, set next to them, could do.

When e’er then you come hither, that shall be

The time, which this to others is, to Me.

The little joys which here are now,

The name of Punishments do bear ;

When by their sight they let us know

How we depriv’d of greater are.

‘Tis you the best of Seasons with you bring ;

This is for Beasts, and that for Men the Spring 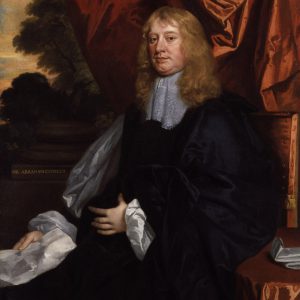