Wake not for the world-heard thunder,

Nor the chimes that earthquakes toll;

Stars may plot in heaven with planet,

Lightning rive the rock of granite,

Tempest tread the oakwood under,

Fear not you for flesh or soul;

Stretch your limbs in peace at last.

Stir not for the soldier’s drilling,

Nor the fever nothing cures;

Throb of drum and timbal’s rattle

Call but men alive to battle,

And the fife with death-notes filling

Screams for blood–but not for yours.

Times enough you bled your best;

Sleep on now, and take your rest.

Sleep, my lad; the French have landed,

Clasp your cloak of earth about you;

We must man the ditch without you,

Charge to fall and swim to drown.

Sleep away, lad; wake no more. 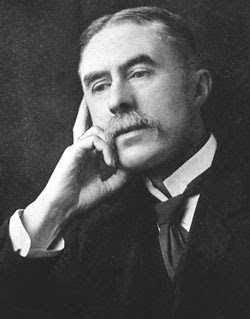 Alfred Edward Houseman
Alfred Edward Housman (1859-1936) was an English classical scholar and poet. His cycle of poems, A Shropshire Lad, wistfully evokes the constraints and limited choices of youth in the English countryside. The simplicity and distinctive imagery of the writing appealed strongly to Edwardian taste, and to many early 20th-century English composers, both before and after the First World War