Karshish, the picker-up of learning’s crumbs,
The not-incurious in God’s handiwork
(This man’s-flesh he hath admirably made,
Blown like a bubble, kneaded like a paste,
To coop up and keep down on earth a space
That puff of vapour from his mouth, man’s soul)
–To Abib, all-sagacious in our art,
Breeder in me of what poor skill I boast,
Like me inquisitive how pricks and cracks
Befall the flesh through too much stress and strain,
Whereby the wily vapour fain would slip
Back and rejoin its source before the term,–
And aptest in contrivance (under God)
To baffle it by deftly stopping such:–
The vagrant Scholar to his Sage at home
Sends greeting (health and knowledge, fame with peace)
Three samples of true snakestone–rarer still,
One of the other sort, the melon-shaped,
(But fitter, pounded fine, for charms than drugs)
And writeth now the twenty-second time.

My journeyings were brought to Jericho;
Thus I resume. Who studious in our art
Shall count a little labour unrepaid?
I have shed sweat enough, left flesh and bone
On many a flinty furlong of this land.
Also, the country-side is all on fire
With rumours of a marching hitherward:
Some say Vespasian cometh, some, his son.
A black lynx snarled and pricked a tufted ear;
Lust of my blood inflamed his yellow balls:
I cried and threw my staff and he was gone.
Twice have the robbers stripped and beaten me,
And once a town declared me for a spy;
But at the end, I reach Jerusalem,
Since this poor covert where I pass the night,
This Bethany, lies scarce the distance thence
A man with plague-sores at the third degree
Runs till he drops down dead. Thou laughest here!
‘Sooth, it elates me, thus reposed and safe,
To void the stuffing of my travel-scrip
And share with thee whatever Jewry yields
A viscid choler is observable
In tertians, I was nearly bold to say;
And falling-sickness hath a happier cure
Than our school wots of: there’s a spider here
Weaves no web, watches on the ledge of tombs,
Sprinkled with mottles on an ash-grey back;
Take five and drop them . . . but who knows his mind,
The Syrian runagate I trust this to?
His service payeth me a sublimate
Blown up his nose to help the ailing eye.
Best wait: I reach Jerusalem at morn,
There set in order my experiences,
Gather what most deserves, and give thee all–
Or I might add, Judea’s gum-tragacanth
Scales off in purer flakes, shines clearer-grained,
Cracks ‘twixt the pestle and the porphyry,
In fine exceeds our produce. Scalp-disease
Confounds me, crossing so with leprosy–
Thou hadst admired one sort I gained at Zoar–
But zeal outruns discretion. Here I end.

Yet stay: my Syrian blinketh gratefully,
Protesteth his devotion is my price–
Suppose I write what harms not, though he steal?
I half resolve to tell thee, yet I blush,
What set me off a-writing first of all.
An itch I had, a sting to write, a tang!
For, be it this town’s barrenness–or else
The Man had something in the look of him–
His case has struck me far more than ’tis worth.
So, pardon if–(lest presently I lose
In the great press of novelty at hand
The care and pains this somehow stole from me)
I bid thee take the thing while fresh in mind,
Almost in sight–for, wilt thou have the truth?
The very man is gone from me but now,
Whose ailment is the subject of discourse.
Thus then, and let thy better wit help all!

Thou wilt object–why have I not ere this
Sought out the sage himself, the Nazarene
Who wrought this cure, inquiring at the source,
Conferring with the frankness that befits?
Alas! it grieveth me, the learned leech
Perished in a tumult many years ago,
Accused,–our learning’s fate,–of wizardry,
Rebellion, to the setting up a rule
And creed prodigious as described to me.
His death, which happened when the earthquake fell
(Prefiguring, as soon appeared, the loss
To occult learning in our lord the sage
Who lived there in the pyramid alone)
Was wrought by the mad people–that’s their wont!
On vain recourse, as I conjecture it,
To his tried virtue, for miraculous help–
How could he stop the earthquake? That’s their way!
The other imputations must be lies:
But take one, though I loathe to give it thee,
In mere respect for any good man’s fame.
(And after all, our patient Lazarus
Is stark mad; should we count on what he says?
Perhaps not: though in writing to a leech
‘Tis well to keep back nothing of a case.)
This man so cured regards the curer, then
As–God forgive me! who but God himself,
Creator and sustainer of the world,
That came and dwelt in flesh on ‘t awhile!
–‘Sayeth that such an one was born and lived,
Taught, healed the sick, broke bread at his own house,
Then died, with Lazarus by, for aught I know,
And yet was . . . what I said nor choose repeat,
And must have so avouched himself, in fact,
In hearing of this very Lazarus
Who saith–but why all this of what he saith?
Why write of trivial matters, things of price
Calling at every moment for remark?
I noticed on the margin of a pool
Blue-flowering borage, the Aleppo sort,
Aboundeth, very nitrous. It is strange!

Thy pardon for this long and tedious case,
Which, now that I review it, needs must seem
Unduly dwelt on, prolixly set forth!
Nor I myself discern in what is writ
Good cause for the peculiar interest
And awe indeed this man has touched me with.
Perhaps the journey’s end, the weariness
Had wrought upon me first. I met him thus:
I crossed a ridge of short sharp broken hills
Like an old lion’s cheek teeth. Out there came
A moon made like a face with certain spots
Multiform, manifold, and menacing:
Then a wind rose behind me. So we met
In this old sleepy town at unaware,
The man and I. I send thee what is writ.
Regard it as a chance, a matter risked
To this ambiguous Syrian–he may lose,
Or steal, or give it thee with equal good.
Jerusalem’s repose shall make amends
For time this letter wastes, thy time and mine;
Till when, once more thy pardon and farewell!

The very God! think, Abib; dost thou think?
So, the All-Great, were the All-Loving too–
So, through the thunder comes a human voice
Saying, “O heart I made, a heart beats here!
Face, my hands fashioned, see it in myself!
Thou hast no power nor mayst conceive of mine,
But love I gave thee, with myself to love,
And thou must love me who have died for thee!”
The madman saith He said so: it is strange. 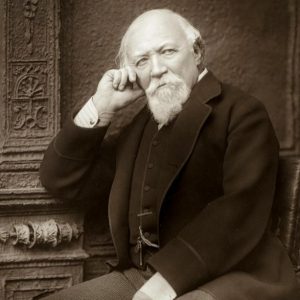 Love In Autumn by Sara Teasdale
I sought among the drifting leaves, The golden leaves that once were green, To see if Love ...

Boot And Saddle by Robert Browning
Boot, saddle, to horse, and away! Rescue my Castle, before the hot day Brightens the blue from its ...

A Child’s Prayer by Siegfried Sassoon
For Morn, my dome of blue, For Meadows, green and gay, And Birds who love the twilight of ...

Sonnet CXXVIII by William Shakespeare
How oft, when thou, my music, music play'st, Upon that blessed wood whose motion sounds With thy sweet ...