On Death’s domain intent I fix my eyes,
Where human nature in vast ruin lies,
With pensive mind I search the drear abode,
Where the great conqu’ror has his spoils bestow’d;
There there the offspring of six thousand years
In endless numbers to my view appears:
Whole kingdoms in his gloomy den are thrust,
And nations mix with their primeval dust:
Insatiate still he gluts the ample tomb;
His is the present, his the age to come
See here a brother, here a sister spread,
And a sweet daughter mingled with the dead.
But, Madam, let your grief be laid aside,
And let the fountain of your tears be dry’d,
In vain they flow to wet the dusty plain,
Your sighs are wafted to the skies in vain,
Your pains they witness, but they can no more,
While Death reigns tyrant o’er this mortal shore.
The glowing stars and silver queen of light
At last must perish in the gloom of night:
Resign thy friends to that Almighty hand,
Which gave them life, and bow to his command;
Thine Avis give without a murm’ring heart,
Though half thy soul be fated to depart.
To shining guards consign thine infant care
To waft triumphant through the seas of air:
Her soul enlarg’d to heav’nly pleasure springs,
She feeds on truth and uncreated things.
Methinks I hear her in the realms above,
And leaning forward with a filial love,
Invite you there to share immortal bliss
Unknown, untasted in a state like this.
With tow’ring hopes, and growing grace arise,
And seek beatitude beyond the skies.

End of the poem


Error: Your Requested widget " randompostforwidget-3" is not in the widget list.

The Bat’s Own Poetry Cave

Duckduckgo.com – the alternative in the US

Quant.com – a search engine from France, and also an alternative, at least for Europe 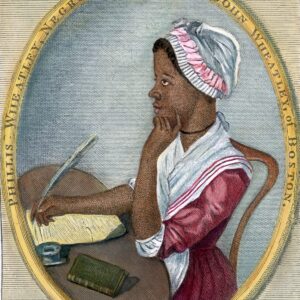 Phillis Wheatley
Phillis Wheatley (1753-84), a negro poetess, also an American poet or Afro-American poet, and an English Colonial poet, . She was born in Africa (in Gambia or Senegal) andwas aptured by slave traders at the age of eight, she was sold to a family living in Boston, Mass., whose name she bears. While serving as a maid-servant to her proprietor's wife, she showed an unusual facility with languages. She began writing poetry at the age of thirteen, using as models Britishpoets of the time, especially Alexander Popeand Thomas Gray). In 1773 she accompanied a member of the Wheatley family to England, where she gained widespread attentionin literary circles. She subsequently returned toBoston. Her best-known poems are "To the University of Cambridge in New England" (1767), In all honestly Phillis Wheatley should rather be considered English than an Afro-American poet but the exact classification of who she was would depend on the political and cultural views, and biases, of the "classifier.